Scenario – Your team has been hired by the Galactic Guard. An old space station is a major spawn centre for the Purge. A guard company (one hundred strong) tried to set up a containment system. Everything was in place but the generators were not powered up when the company was overrun. You’ve been promised five universal assets if you complete their mission. An additional three if you get details of how the Purge have been using the station from the sensor logs.

Map setup: PICTURE COMING
Central area with 2-4 offices and only four exits (each one a cell door) and place four generators outside the central area, but near the four exits. If you’ve got enough as well as the cell doors being closed or open you could have empty (no blue/green insert) generators replaced with ones with the inserts when they are activated.

Hostility level at the start: Watch Your Back
Objective (solo objective): Have all four generators running at the same time and defeat all purge left outside the containment zone (who will otherwise destroy the generators to end the containment once you leave)
Secondary Objective: Get a data file of the sensor logs from an office inside the containment zone (takes one action to search the computer for the file – roll a 4+on a D6 - and one to download it).
Special Rules: 1) Generators need to be repaired (takes two actions). Once they are active the connected cell door is closed. Live ones can destroy them with two hits – will need GM, player agreement or dice roll to decide action. They can be repaired again for a further three actions. If destroyed again repairs cost four actions, destroyed again then five, etc.
2) Remove Galactic Guard from event pack 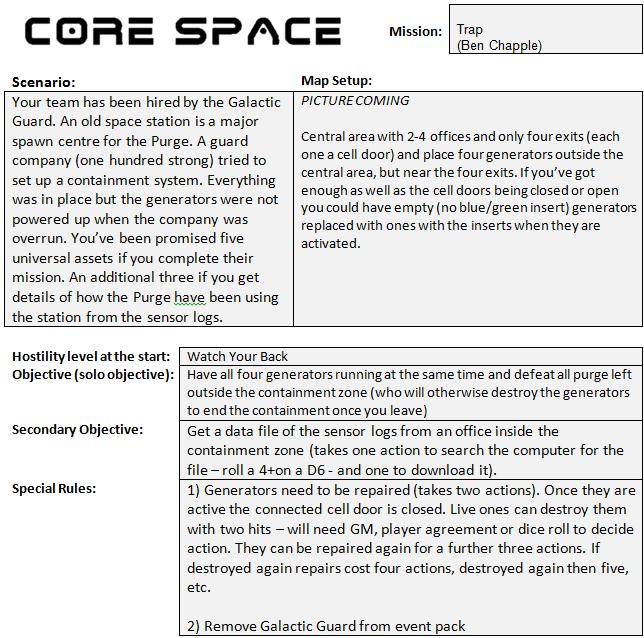 Similar topics
» Secret Mission: The Forgotten Island
» I can't get into the Mission place!
» Flying Monkeys Vanished?
» Traveller's compass - heart of Africa
» i need help on the missions