Scenario: You receive a coded message. There’s a defector in the Galactic Guard who wants out - in return they’re offering the latest fleet codes, allowing you to know the location of any Guard ships a sector away. You decide it’s worth the risk and head to the meeting point, a rather unsavory trading post...

Map Setup: Must include a bar, gang armoury and some shops.

Hostility level at the start: Relax

Objective (solo objective): Meet the contact in the bar and get them back to your ship.

Secondary Objective: Raid the gang’s armoury to get a rare weapon

Special Rules: When you meet the contact he looks familiar - it’s Director Zool! The Guard clones its senior officers so the new Director Zool is on the station trying to track his clone down. Gang members start on the board and will only start taking actions after a shot is fire or someone enters their armoury. Two guards arrive at a random purge spawn point at the start of turn two and act normally. Zool and Juggernaut arrive at a random spawn point at the start of turn four and act normally. Defector Zool is keen to be off the station before the chasing guards catch up - he’s not keen to be on the other side of Guard hospitality - so will take orders from the closest trader. If two or more traders are the same distance then roll a dice for who he will follow. If you get Defector Zool back to your ship you get to ignore the Guard event card in one future game. However, if Zool sees Defector Zool you must use it in the next two games or lose it. 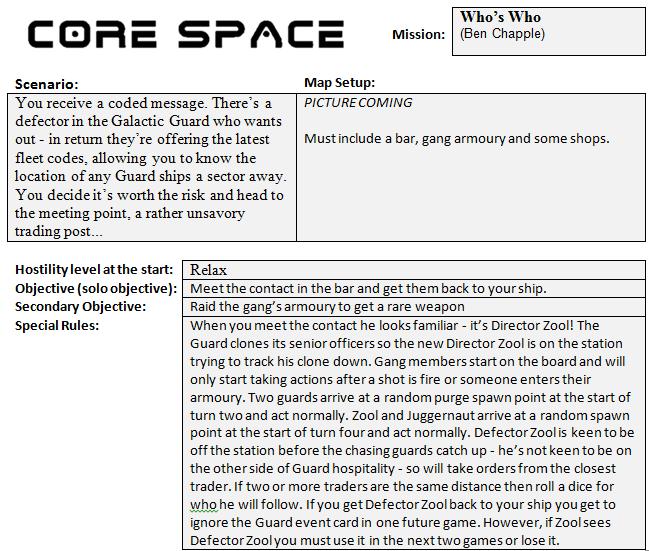 Similar topics
» Secret Mission: The Forgotten Island
» I can't get into the Mission place!
» Look Who's Talking Trilogy (1989-1993) [DVDRip]
» Traveller's compass - heart of Africa
» i need help on the missions