Scenario: A planet is being destroyed by its own malfunctioning artificial weather system. Only one man in the galaxy understands the ancient system, but after being involved with some deals that some would call shady - others would call getting a non-space faring species to sell their entire planet’s mineral wealth for a broken laser pointer something else – he is wanted by every legal and illegal organisation in the cosmos either for his actions or his expertise. He’s agreed to take on the repair job for the weather system for a price that would buy a fleet of ships. You’ve been hired to deliver him – the pick-up point a derelict space station. Get in, find him and get out – simple... [Credit: Ben C, Jason J and Mancario]

Hostility level at the start: Guarded

Objective (solo objective): Find your contact and get them safely to your ship – four universal assets

Secondary objective: Although powered down there must be some useful equipment onboard, have a look around and it could be its own reward

Special Rules: 1) Place tokens on the board equal to the number of non-traders. Write out paper tickets for each model and put it in a bag. Treat all tokens as civilians for movement. As soon as they come into view of a trader draw a ticket and replace the token with the relevant model.
2) Suggested models – Contact, two Galactic Guard, three scavengers (civilians), three gangers and four harvesters. Also include eight blank tokens for false signals, rodents, old equipment or random noises.
3) When purge are added put a relevant ticket in the bag along with one blank ticket. Then roll for spawn points separately for the two tokens you’ll add to the board.
3) Make sure some rare items are in the crates.
4) Each trader gets a torch for free. It shines light equal to the length of two walls. 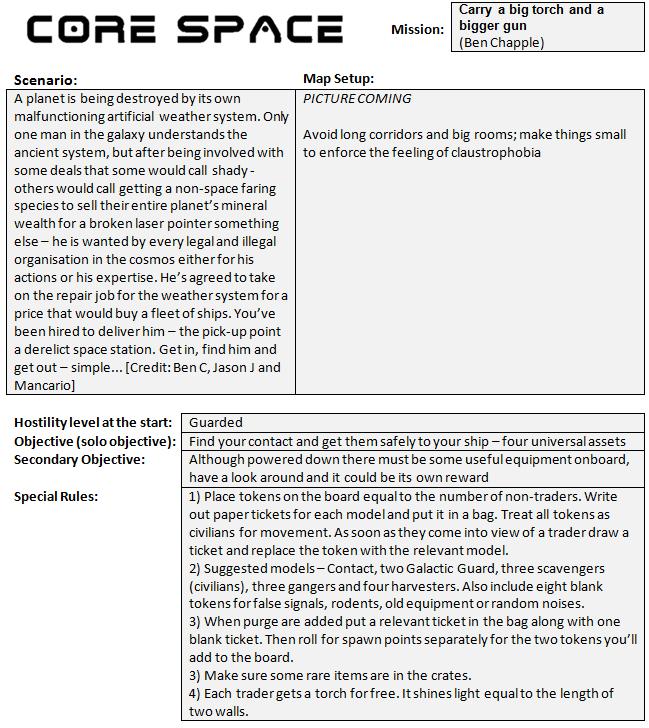