Scenario: Remember the cliff-hanger ending of the last mission – barely escaping with your lives with one crew member not quick enough and being grabbed by the Galactic Guard.
You would leave them in prison but they’re the one that knows how to fix the hot tub and the teleporter. You’ve found out where they’re being held, but need to act quickly as the prison is about to be attacked by gang members aiming to free an underworld kingpin.
As well as getting past all the prison’s defenses there’s the other inmates to worry about...

Map Setup:PICTURE COMING
2x4 traders and gangs start at short end, and then down the board it runs green generator, main entrance, two blue generators and cell blocks.

Hostility level at the start: Relax (gang members and guard to deal with so starts difficult)
Objective (solo objective): 1) Rescue your crew member – the only reward is the smile on their face and a repaired hot tub.
2) There is one high value prisoner – find them and rescue them for a 10 universal asset reward.
Secondary Objective: 1) Don’t set off the alarm – if you set off the alarm the Galactic Guard are hunting for you. Pay 25% more for any items (not universal assets) bought in the post-mission phase.
2) Rescue the underworld kingpin – if successful you can buy up to five universal assets at 50% of the normal cost.
Special Rules: 1) Put equipment of captured crew member in random crate.
2) Four guards start on the map. They will not be activated until the alarm is triggered by someone destroying a generator, firing a weapon or moving within or through a guard’s view.
3) Access to the main jail is through a cell door, which is virtually impossible to hack. It is powered by a green generator.
4) The cells are split into pairs and each pair has cell doors, which are virtually impossible to hack. Each pair is powered by a blue generator.
5) Each generator can be hacked (insert advanced rules or house rules) or destroyed by two hits with any weapon. Anyone in a generator room when it is destroyed suffer a hit (armour saves as normal). The nearest guard gets an additional action in his activation following the destruction, which will be used to move towards the generator room or shoot at any available targets.
6) Place four identical tokens in the four cells to represent the four prisoners – crew member, high value target, underworld kingpin and one live one. Once cells are unlocked they will act as civilians and will only be revealed when a gang member or trader can see them. Roll a D4 (or a D6 and reroll 5s and 6s) – 1 live one, 2 underworld kingpin, 3 high value prisoner, 4 crew member. Live one acts as normal in purge activation, Kingpin will move towards gang member if he can see one otherwise will follow directions from traders, Prisoner will move towards nearest trader or gang member, crew member is under the control of his former captain (alternative rule follow prisoner rule and potentially they'll end up with a new crew or joining the gang).
7) If your crew member is not rescued (by anyone) you cannot use the emergency teleporter at the end of the mission. 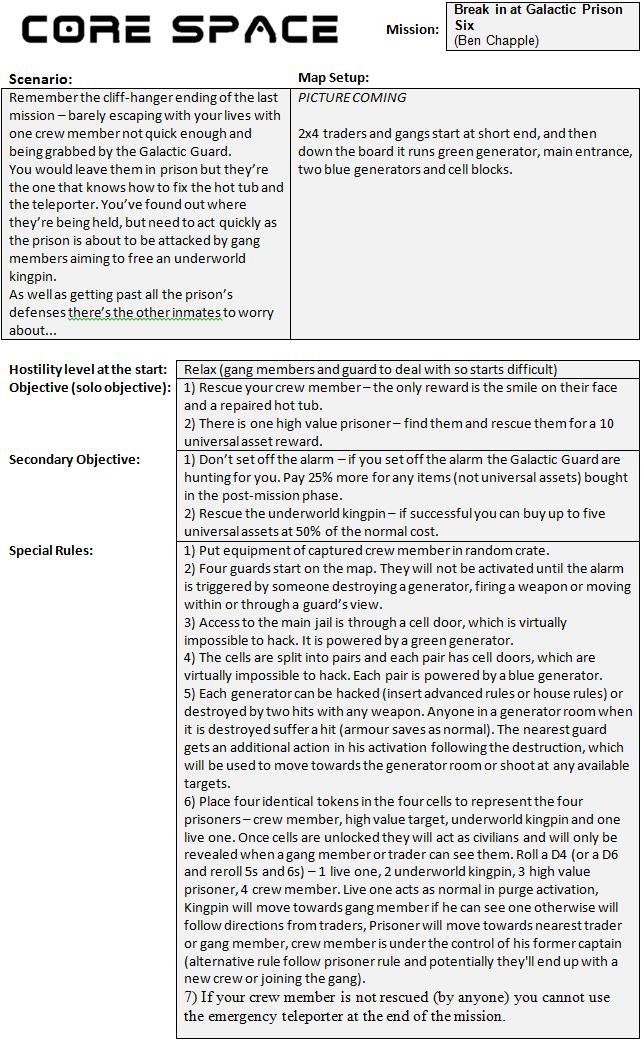