Scenario: You’re on a planet having just completed a delivery and picked up your credits for the job. Your ship remains in space as the heavily polluted atmosphere precludes normal ships from traveling through it – it destroys their engines. The only way on and off the planet is via a specially adapted lift system from the surface to a small space station. This was why this location was chosen as one of the main scientific research centres into a solution for the Purge. Scientists like the rest of the galaxy like the things they’re not allowed, which is why you’re here. However, the Purge has found another way onto the planet and is flooding across the surface. Can you hold them back long enough to allow the scientists stationed here to escape with their vital research, get just the research out of there or hightail it out of there because it’s not your problem? [Credit - Inspired by comments on the Kickstarter I can’t now find!]

Map Setup: Build a large docking bay at one end of the board and create more exits into the planet-side building than the number of traders
.
Hostility level at the start: Cover me

Objective (solo objective): 1) Survive – its own reward
2) Save at least three of the five scientists by getting them off the planet – three-five universal assets depending on number saved
3) Download the data from three different locations – medical bay, research centre and cloning centre - onto three separate data files and get them off the station – reward is 3,000 credits.

Secondary Objective: Save at least three other civilians – they reward you with whatever they’re carrying – take an item per civilian out of the bag. If multi trading teams then divide number of civilians by number of teams, rounding down for number of items each team receives.

Special Rules: 1) Before you start share out three 500 credit tokens to each team – this is your payment for the shipment and must be equipped
2) If a roll for a civilian action means they would do nothing then they will move towards the docking bay
3) Scientists act as civilians until they see or are seen by a trader at which point they join that crew. If crew downed or leaves before scientist they revert to civilian rules. Scientists are capable of carrying a data file but no other equipment
4) Galactic Guard will only target Purge
5) Remove gangs card – they’re not welcome on this carefully managed world
6) Alternative play – just build a docking bay, scatter buildings and terrain across the open area and have the traders entering the board the opposite end from the docking bay. Scientists and civilians randomly across the board 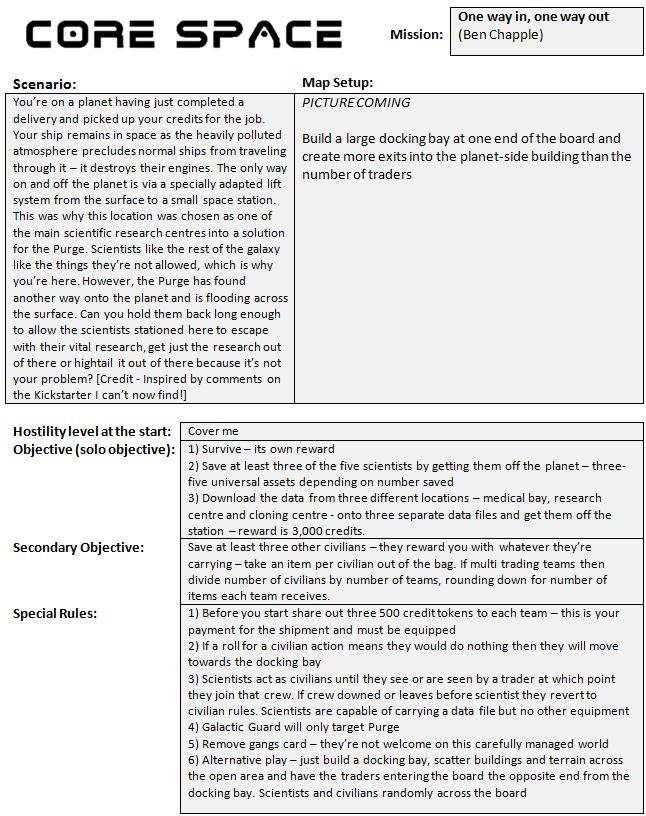