Scenario: You’re taking a well-deserved rest at a scummy bar in a quiet part of the galaxy. Well you were until a bleeding maintenance worker stumbled through the doorway screaming as he was followed by a harvester. Dozens of guns including your own fired into the harvester destroying it and taking out the maintenance worker in the process. Outside the bar it is clear the station is overrun and the way to your ship is blocked. The purge are attracted to life signs, if you can rework the station’s equipment to make it appear like there’s lots of life signs the other end of the station from your ship then you have a chance to escape.

Map Setup:PICTURE COMING
Bridge needs three workstations and only one door. Bar should have several exits.

Hostility level at the start: Cover me
Objective (solo objective): 1) Survive
2) Rewire the bridge controls to create a false impression for the purge (take an action at the three different work stations on the bridge)
Secondary Objective: Grab a bottle of your chief engineer’s favourite tipple from behind the bar – one action – and get it back to your ship without losing a point of health, the shot or attack smashes the bottle and apply a bonus universal asset to your ship for repairs.
Special Rules: 1) The bridge is protected by two security guards who will not leave their posts and will activate once someone opens the bridge door.
2) Once the false impression is activated place a token on the board (at least two walls length away from an edge. The Purge (except live ones) are only able to move towards this token until a purge reaches the token or four turns pass.
3) All traders start the game with one fewer than their normal maximum ammunition.
4) Include as many civilians, who were also enjoying the bar, as you wish. 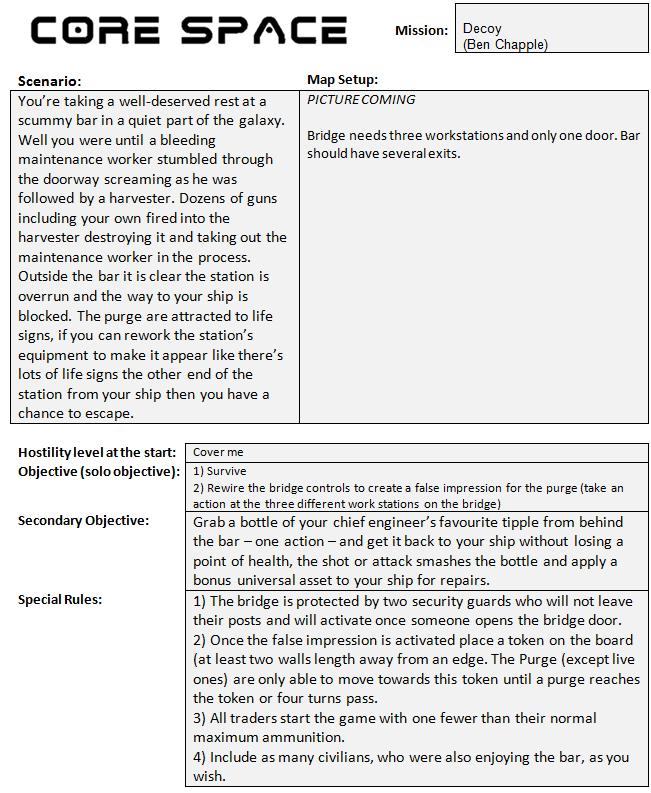