Scenario: The GC has detected a departing Purge operated Trader ship departing a nearby outpost. The GC requisitions the two fastest Trader ships at their space station to give chase and board the ship. One Trader ship has a crew and a GC squad and the other also has a crew plus GC squad/Gang squad/another crew. These Trader ships dock either side of the Purge ship.

Map Setup: Enough terrain to build a board set up as the deck plans of a Trader ship with docking points on two sides.

Hostility level at the start: Cover Me.

Secondary Objective: Get to the ship's hold and take an action (pictures) and escape (20 UA to be shared)

Special Rules: There are two Assassins and one Live One on the board (no more appear) to start. A maximum of 4 Devastators and 16 Harvesters are spawned in the game. Add 3 Harvesters per turn once any shooting has started. One room has a pile (6-

of random items (recovered from the bodies harvested). 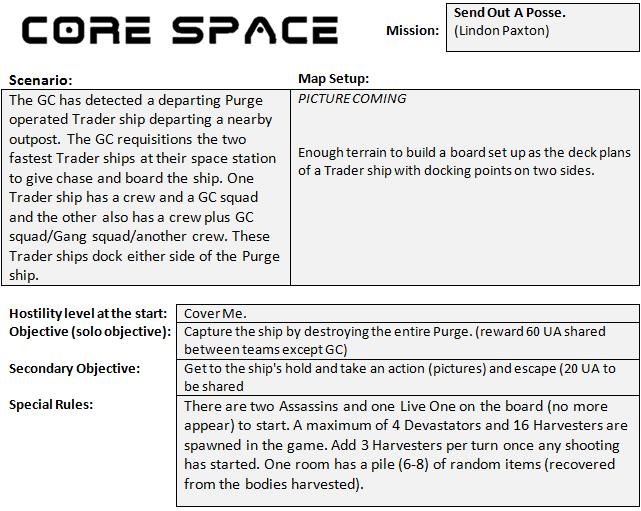 Similar topics
» Secret Mission: The Forgotten Island
» I can't get into the Mission place!
» To Request a Gift on your Friend's Wall:
» Traveller's compass - heart of Africa
» i need help on the missions