Scenario: A team of 4 Live Ones, disguised as a known Trader crew have arrived at the space station. A small group of Purge remain hidden on their ship ready to attack the station when the Live Ones attack. The Lives one aim to attack the GC post in the station killing the GC commander and the GC and destroy the armoury to prevent the weapons being used against the Purge attack force. Possibility of them coming across another crew that know them and discovering their fake identities.

Map Setup: 1 x Cyberpunk terrain. Corridor with airlocks and a small GC area at the other end of the board with rest area, commander office and armoury (with crates of weapons and armour). GC commander (Director Zool?) plus at least 4 GC (chance of 2 man patrol returning before or after Live Ones attack).

Hostility level at the start: Relax

Secondary Objective: Destroy all of the Purge and grab as many weapons as possible from the GC post.

Special Rules: Disguised Live Ones carry and use good quality equipment typical of a veteran crew until discovered when revert to Live One stats (after first attack round). When Live Ones attack unleash 9 Harvesters, 2 Devastators and 1 Assassin from the Purge ship airlock. For a bit of extra fun the original crew could be on the station (enables use of duplicate crew models for one team. 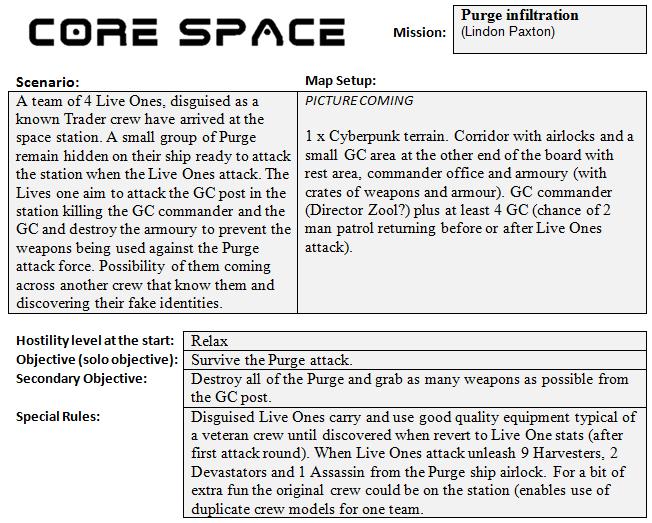