Mission 24: In the GG (Lindon Paxton)

Mission 24: In the GG (Lindon Paxton)

Scenario: Galactic Corps Intelligence has determined that Purge ships after a successful "harvesting" attack on ships, stations and outposts travel to one of the earliest space stations to be completely overrun. This could be where the biomass is being delivered. A GC attack on the station was defeated with massive loss to ships and men. It is now thought at a small attack using a low signature shuttle may have the best chance of getting to the station, finding out what is going on and possibly sabotage the Purge operation there. The shuttle carries between one and crew teams. The shuttle will dock at a small auxiliary airlock either on the machinery level or the main level (player choice).

Map Setup: 2 x Cyberpunk 2 x 2 (one machinery dominated, other has central large cargo area). There should be access ladders (4+?) from the machinery level to the main level.

Objective (solo objective): Spend one round viewing the central cargo area from at least two points 90 degrees apart (getting picture evidence) and get back to shuttle.

Secondary Objective: Attack and destroy either or both the biomass vat and the Purge production apparatus and then escape.

Special Rules: Two separate boards, one for the machinery level with conduits, reactors, empty crates, and at least four ladders to leading to the upper main level but at most one onto cargo area (and then furthest from the airlock). Four (or more) Harvesters randomly patrolling the machinery level and one spawn point on this level. One spawn point for Assassins and one for Live Ones at farthest edge of central cargo area. Other three spawn points associated with the Purge production apparatus. Hostility level goes up one for each non-silent ranged attack and five for first sighting of the crew. The biomass vat and the production apparatus each take 10 hits to destroy. 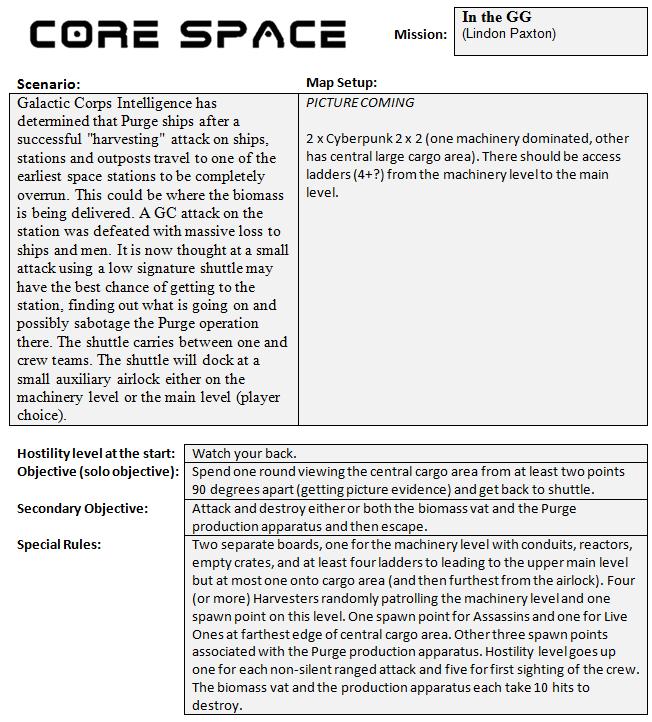