Mission 23: Things they are a changing (Lindon Paxton)

Mission 23: Things they are a changing (Lindon Paxton)

Scenario: This starts as a normal Purge attack on a small space station. But the Purge change their AI rules at an appropriate point.
(The following should be hidden from the players. The Purge have learnt their lesson from being defeated in too many standard attacks on space stations. They change their modus operandi to destroying the power generators on the space station requiring its inhabitants to fight in poor emergency lighting and with their life support running out thus making them easier pickings for the Purge to harvest).

Map Setup: 1 x Cyberpunk plus two power generator/reactors (can use conduits supplied or reactors from Outbreak and previous SF terrain).

Objective (solo objective): If have a GM this should not be specified too soon - Save the power generators from destruction. (Hopefully their presence on the board and not being a crew objective should give a clue).

Special Rules: The Purge should start with at least 5 Harvesters, 1 Devastator and 0-1 Assassins. If there are any Assassins present they will try to find a way to the generators by back ways if available. When any Purge have an opportunity to get closer to the generators they count the generators (even if out of sight) as their priority target over the standard AI rules for them. Each generator should require a reasonable number of hits (thinking 5-10) to destroy (cannot make it too easy for them). If both power generators are destroyed then no long range shooting and medium range remove 1 combat die. Also no sprinting and if running roll one die and if a pang then fall over and take one damage. Crew must vacate to their ship within 6 Rounds (before they run out of air). Reward of 10 UA if destroy all Purge on the board, 10 UA for each power generator still intact and an extra 10 UA if at least one generator is undamaged. 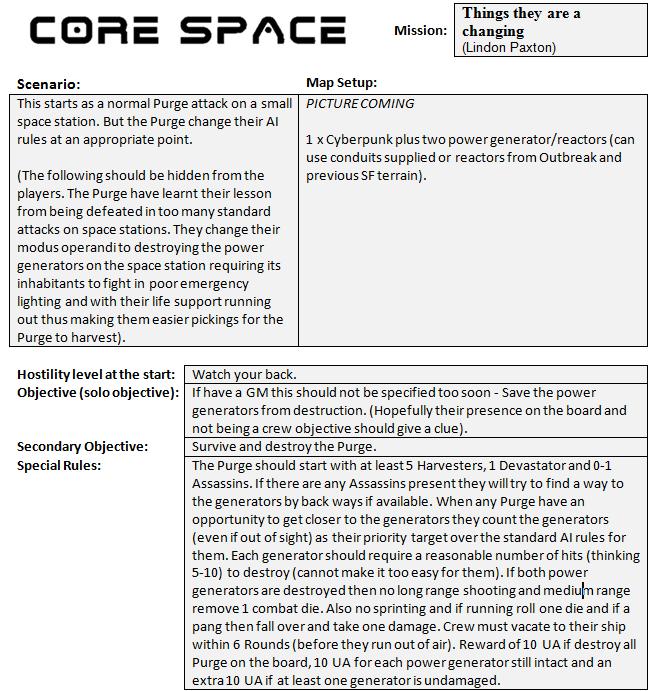 Similar topics
» Secret Mission: The Forgotten Island
» I can't get into the Mission place!
» Rare Points
» To Request a Gift on your Friend's Wall:
» Orions Magical Wokshop ITEM LIST