Scenario: Lars is having a drink at Zed's bar. He's been going at it for a while, every so often he could swear Zed has got two heads. It's been a tough day, and he needed to let off some steam. Satiene has been her lovely charming self again the past several days, sometimes he wonders why in the galaxy he teamed up with that woman. There's only so much spite and getting growled at he can take, and today he's had enough of it. She gave him an earful that morning about his purple thongs laying around the ship. He couldn't understand what the problem was, he only wore each pair for 2 weeks, it wasn't like they had grown legs just yet (although he did hear some weird sounds coming from the pair around the airlock lever the other night). She was furious though, and after a shouting match he left the ship to find a drink. But he'd had enough, and finally he saw things more clearly. Yes, it was time to tell that woman to find another partner, why should he keep dealing with all that? After all, he is Lars, famous fortunate trader. He'll find another partner in no time.
"Time to give that woman a piece of my mind" he tells himself. But not before he's had another shot of 2098 Pure Green Gurgle. He signals to Zed to fill his glass up again. "Bottoms up!" He empties his glass and turns around on his bar stool. Just as he is about to get up, 2 Purge Devastators burst through the door. They scan the room and once they notice Lars, their gaze stays fixed on him. "Drat", he thinks, "I cannot take on 4 all on my own. Better head out the back door." He wobbles around the side of the counter, making his way as fast as he can to the back door. The Devastators start pursuing him. As he's about to reach for the unlock panel, the door suddenly slides open. Satiene is standing on the other side, holding her favorite energy rifle, which is covered in Purple thongs. Needless to say her face spells doom, she too has had enough and has decided to give Lars a piece of her mind, or rather, her arsenal.

Map Setup: Zed's bar is in one end of the map. It's a large room, with plenty of scenery to run around and take cover behind, including several cases with weapons. There are 2 exits, with 2 devastators at one door and Satiene at the other. In Zed's bar there are several civilians, who can join the fight on either side. Throughout the space station lower and medium level Purge are lurking. The airlock to the ship is on the other end of the map.
Hostility level at the start: High

Secondary Objective: Secondary objective for both = clean out the purple thongs littered in front of the airlock to reach the ship for extra UA (but beware of being hunted down).

Special Rules: - an energy riffle that blasts purple thongs for Satiene. Upon being hit by a blast with a purple thong, the victim takes the usual damage but also gets dazed/blinded, meaning he can only perform one action on his activation, requiring the other action to pull the thong of his/her face.
- Three thong tokens are littered around the airlock. Each is worth 100 UA when cleared up. To clear it up, one action must be spent in contact with the token. It doesn't have to be added to the dashboard, as it's considered 'thrown out into space' (you really don't want to pile up Lars' purple thongs on your dashboard...).
- a 'slightly intoxicated but I'm still doing fine' state card to put next to Lars' dashboard. For his first 3 activations, this card is active and taken into account. It can be discarded afterwards. It reads: "You're feeling absolutely fine. Everyone keeps telling you you're a little red in the face, but what do they know. Weird that everyone has twins though, must be a plot against you. But they won't get you, you're stronger than ever" - Manoeuvring is limited to 4 inch. Running and sprinting require one extra action point. 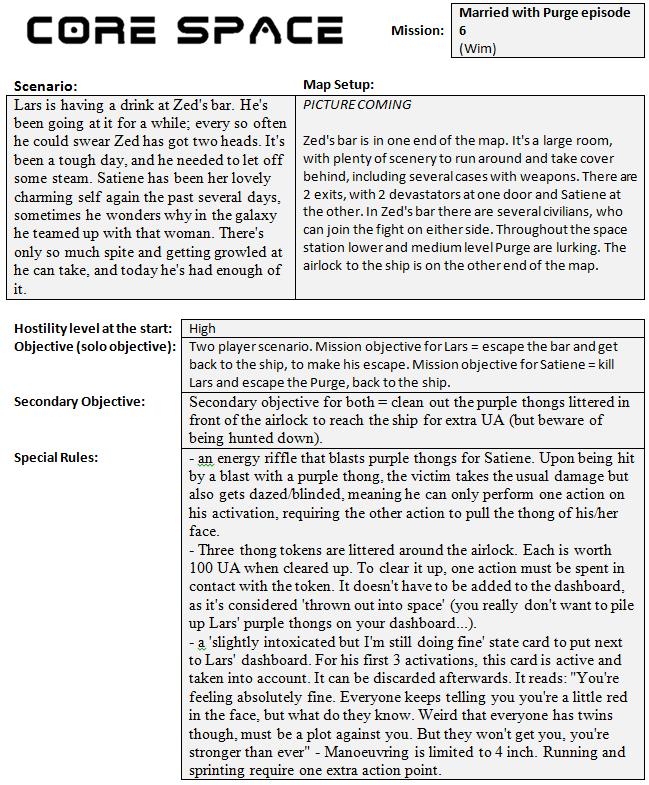