Scenario: A trader ship on approach to a Trader Station is attacked by a Purge corvette and is damaged with one of the crew seriously wounded. They have no option to to dock at the station despite the Purge attacking it as they need to get their crewman to the medical facility to save their life and then escape or defeat the Purge.

Map Setup: 1 x Cyberpunk with airlocks on one edge, medical facility about 2 3rds away.
Hostility Level: Cover Me.

Objective: Get one of the crewmen to the medical facility and get them treated (to save their life). The either recover safely to their ship or defeat the Purge.

Special Rules: The crewman needs to be treated in facility for 3 rounds. As they make their way to the medical facility there are civilians and Faction thugs coming the other way. 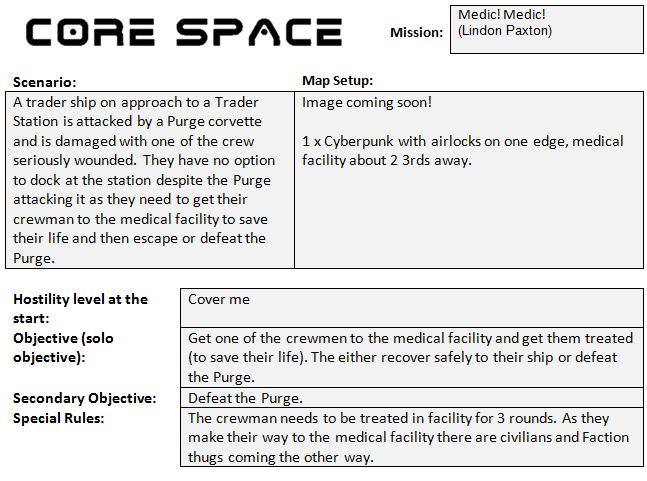 Similar topics
» Roland's Jokes
» Secret Mission: The Forgotten Island
» I can't get into the Mission place!
» Traveller's compass - heart of Africa
» i need help on the missions